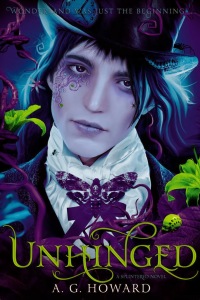 Unhinged by A.G. Howard
My rating: 4 of 5 stars

Unhinged is the second installment in this spin on the Wonderland world. I’ll openly admit that I didn’t love the first book. I liked it enough that I had interest in picking up the next. However, I didn’t like certain behaviors from Jeb. I also just found that the book dragged at times and I would skim over some chunks and not feel compelled enough to go back and actually read what I missed. That completely changed in this book.

You can really tell how Howard’s writing improved in this novel as it felt more forward moving. It was more catching. More importantly it just read so much smoother. It was the kind of improvement that made the experience that much more palatable and allowed the story to take stronger focus.

Let me start by saying that I still do not like Jeb. Jeb went from being control and not believing in Alyssa to being rather inattentive and putting his career before her and claiming it was for them. He was largely absent, much to Alyssa’s dismay and never really picked up on how this was negatively effecting her. He was very focused on his career, which wasn’t a bad thing, but just don’t say it was all for Alyssa. So now that Jeb had confidence in Alyssa, he was now kind of a jerk.

I do still love Morpheus. He is manipulative. However, he never pretends that he is not. He plays things very clear, even if you don’t understand his real meaning until after. Normally this behavior would irritate me somewhat, but it doesn’t. Let’s be real, I’d rather Morpheus behavior than someone who doesn’t believe in me and brushes me off. Neither situation is ideal, but my preference is clear. Morpheus’s antics continue in this, but yet again he has a very reasonable goal and one that’s good. It’s shocking that someone so dark is constantly fighting for what is good, but I do enjoy it. He loves Wonderland.

I was rather shocked that this novel didn’t delve back into Wonderland considering that the entire plot was about how Wonderland was in trouble. That said, I enjoyed the change of setting and staying in the real world. There was still a lot more that we learned about the inhabitants of Wonderland and everything about the place in general.

The plot was solid. It wasn’t amazing there were no amazing twists or turns. It was mostly straight forward and used the things brought up effectively as bookends. The pacing felt a bit more brisk than Wonderland, yet I get the feeling there may actually be less plot points. Regardless it flowed nicely and tied up this leg of the journey.

Unlike the first book which tied things up nicely, this was a messy end. It was sad and open ended and made me desperately want to pick up the next book. Something that the first did not do. Despite the mess it did feel like a fitting end to this leg of the journey.