The episode opened with a team working as a well oiled team. Considering that Oliver is now the outsider on the team it’s surprising that they work so well. Considering that internally they have so much turmoil it’s surprising they can work together so well. I have to admit that the choreography was well done in the opening sequence. We got a glimpse a bit later of them working well as a team a second time for a briefer moment. 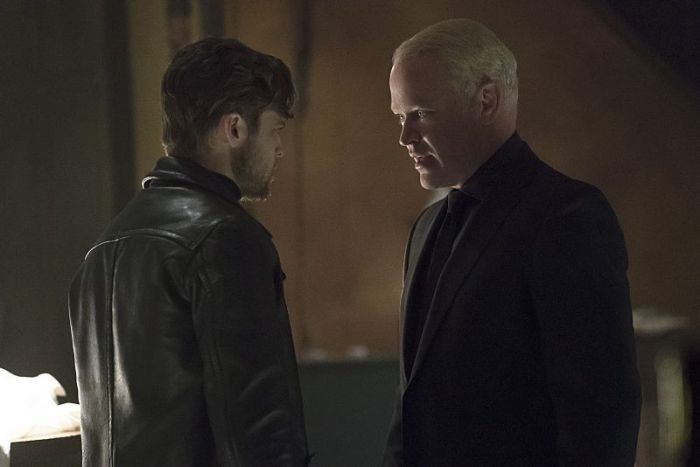 Felicity and Oliver are still in a great place and I’m enjoying it. Despite Oliver’s new duties as Green Arrow, he’s still holding on to some of the domesticity he had adopted. In fact, he went out and got Felicity a fern for her first day as boss of Palmer Tech and even packed lunch. They truly are great together and I’m enjoying the levity of their pairing. They don’t need to be all grief and doom.

Felicity’s first day back at work was amusing. She’s walking into a giant mess. Palmer Tech is still facing crumbling. The money flow is not coming in. This is the fault largely because of the trouble in Star City. Costs need to be reduced and Felicity’s board actually has a plan to do so. Enter Curtis Holt (aka Mr. Terrific). He created an algorithm to determine who to cut. Sure, he may not have designed the algorithm for that, but that was it’s use. Felicity is none too pleased having to fire people and the guilt laid on by the employees. I have to admit it was cruel justice that Holt ended up being one of the people to be fired. It was just like Felicity to find a way around it all.

Meanwhile Oliver and Thea were reconnecting with an old family friend, Jessica Danforth. It just so happened that she wanted to follow in Moira’s footsteps and run for mayor. Hell, she still wanted to run even after she was shot at. It wasn’t surprising that Damien Darhk was behind it all. He is after all trying to get people to turn the city over to him. Allowing Danforth to become mayor only poses a problem for him. This lead to all sorts of mess as the man Darhk hired was a bit too eager with the task, kidnapping Jessica’s daughter. It’s a shame that Darhk got what he wanted at least for now. That won’t last now that Oliver decided to run for mayor.

Thea is so filled with rage. She’s going over board and when Oliver had the audacity to call her on it and demonstrate that she could have done something else, she attacked. She wasn’t holding anything back. More correctly, she’s broken. It is only now that things are really coming out about what happened to Thea in Nanda Parbat. They are just now seeing the effects of the Lazarus Pit on her. The thing is this is only giving Laurel ideas. Thea on the other hand believes she is in control. It isn’t until she burns a man to death that she seems to even begin to realize that she is not nearly as in control as she thinks she is. Now Laurel is using Thea’s misstep to try to get Sara back by going to Nanda Parbat.