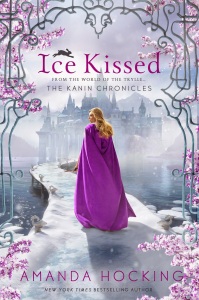 Ice Kissed by Amanda Hocking
My rating: 3 of 5 stars

Hello book number two. I liked Frostfire, but I certainly didn’t love it. While I inhaled Ice kissed, I didn’t really fall in love. I had issues with structure. I was uncertain about where it was heading and the end result while interesting didn’t feel quite so interesting when you boil down the events that made up the whole novel.

This book largely stepped away from the romance, but that was not to say there still weren’t a number of those elements. This is largely because a large part of the book had the characters separated. I honestly missed the romantic elements because over time I got really attached to Ridley. There were certainly moments in this that kept me excited and ready for more between the two of them, but they were down played and it was for a good reason. Instead everything shifted to a conversation about relationships and work and what is more important. It’s something that Bryn struggles with so addressing this without any distractions was effective.

I was really frustrated with Bryn in this book. Time and time again she kept a secret only for it to blow up in her face. It was beyond annoying not only to see her do it once when she knew it would backfire, but for her to do it again. Characters make mistakes. That is fine. When a character doesn’t learn from their mistakes it gets annoying.

The plot in this book was also rather slow and structured in an odd fashion. It felt largely like the beginning should have been at the end of the book. Yet, it did give some sort of structure for the end of the book. The plot of this novel didn’t springboard until the problem from the last book was finally resolved. So once things were on their way it should have been better. Unfortunately the plot with the Skojare was slow moving and filled with a lot of political intrigue, but none of the excitement to go with it. It felt too straight forward and bland to really be interesting.

Visiting the Skojare kingdom again was a treat yet again. I feel like we’ve spent as much time there as we have with the Kanin. I really don’t mind because the imagery used to describe the underwater castle is beautiful. I could just image how wonderful the place was. Sure there were a few logistical things that didn’t make sense, but it did elicit a sense of wonder in me. I couldn’t get enough because there constantly seemed to be something even more grand to be discovered.

While this review may seem a bit negative, I did walk away from this book again intrigued by the prospect of what would happen next. It left off at a place that will force Bryn into so perilous situations and she can finally get some answers. I want to know more and because of that a number of the flaws feel less terrible to me.