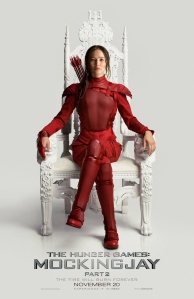 I loved Mockingjay when I read it a while back. It made me have so many feels. It incorporated so many things into the story that it was hard not to find something you can like. However the book felt like two distnct parts. One that was slower and allowed for the characters to stew in what happened and start to make progress toward end game. Then there was the half that had all the characters on the move. That’s what this movie focused on in the intense conclusion to this series. While it wasn’t the most faithful adaptation in the series it was still really good.

In the final chapter of The Hunger Games saga there was a lot that needed to be concluded. At the point in which we left off in the last installment, the characters were at a low point. Despite a number of successes in the fight against the Capitol and Snow, everyone was at a downer. However, the movie doesn’t just sit there and wait. It jumps right into them seeking away to solve their problems and it felt good watching that play out. 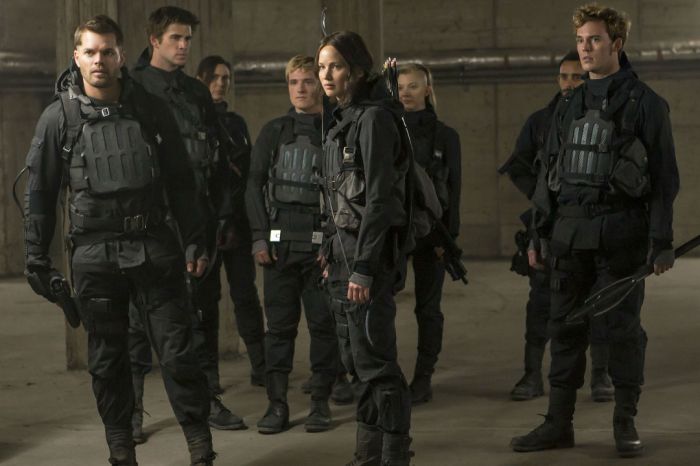 The pacing of this film felt fantastic. After the last movie was a slower pace, the quicker speed felt like a great change that the series needed. The Hunger Games has always been the type of series the doesn’t slow down. It is a barrage of events that scar all characters involved and this was no different. However, it also felt good the way it picked up and slowed down.

The one problem that I had was related directly to the pace. The story moved so quickly that it was hard for me to let the emotional punches really sink in. There were a few that were given the time necessary to breath, however a number of them felt rush. The crushing pain of losing the characters was lost in those moments. However, just like Katniss, we didn’t have time to breath and dwell because some other hurdle was approaching that they needed to deal with. While that made for keeping the 157 minute run time feeling short, it meant that death never got to resonate. Instead, you reached the end of the film and looked back and realized just how many people were lost in the process. And there were a lot. A number of who you should have felt how much of a blow that was.

One of the driving forces of The Hunger Games is the relationship between Peete and Katniss. Don’t get me wrong, this is not a romantic story, but it has it’s moments. The journey Katniss is going on simply doesn’t allow for her to take that time to build those relationships in that way. That doesn’t mean we aren’t seeing those progressions. In terms of Katniss and Peeta, they had a lot of things to deal with because of what was done with him in the Capitol. I felt that they handled it really well as Peeta felt like someone who was broken and trying to fix himself, but just couldn’t without help. It made for some really great moments as Katniss was doing everything she could to help him. The tables were finally turned and it was Katniss who had to save Peeta this time around. The somber moments when the two of them had to look at each other and acknowledge that everything was so entirely screwed up, but they still needed to stay strong for each other were great. Their moments together were some of my favorites because of how raw and unexplored their feelings were. I left wanting to see more of them together. 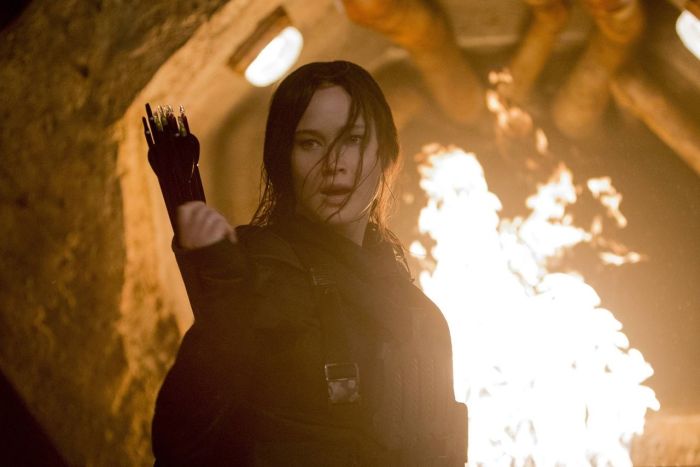 In the past, I have lauded The Hunger Games for staying so true to the books. They were faithful and thanks to the strength of the novels, that translated well on screen. Just because the movies were faitful does not mean that everything made it in. WHich is why when it was announced that Mockingjay would be split into two parts, for once it actually seemed like a good idea. However, with Part 1, I started to wonder if it was really the best idea. However where it really proved to be necessary was this movie. As I mentioned at times, it felt extremely rushed, but it had to be. to create the frenetic atmosphere that being in a war zone should evoke. There still managed to be things that were left on the floor. The situations were rushed to get to the march to the Capitol. So in a number of ways, this didn’t feel nearly as faithful as some of the other installments and not just in the sense that somethings need to be cut and others need to be shown rather than just explained. This one skirted over certain dynamics because their simply wasn’t time.

One great thing that Mockingjay Part 2 did was evoke a sense of finality. As everything was hitting the fan and people were dropping left and right it felt like the final chapter. Thing swere reaching a fever pitch. This war was coming to a close. Even as things trudged toward an end after the climax, there were still things to be done. We watched as not just buildings fell, but people. The lose ends that had been opening up throughout the series were tying themselves up and it felt good. Knowing that everything was coming to a close felt right for the characters and they all got their end. We weren’t just left hanging. Most importantly, the final moments of the movie as we saw where their lives had progressed to felt just so right. 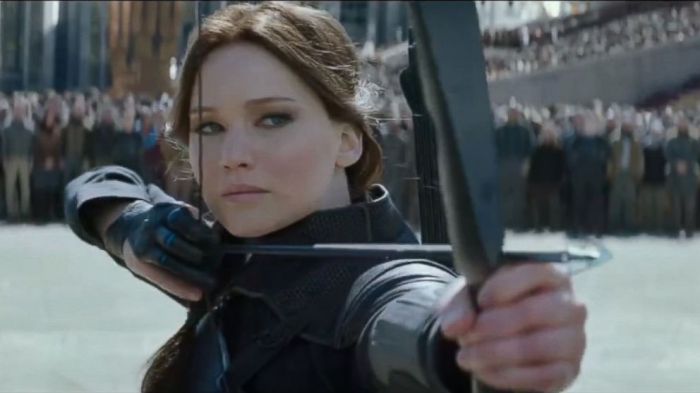 Mockingjay Part 2 delivered a stunning and captivating finale that was so action packed that at times it was almost too much. It was their final fight and you could see the exhaustion and determination. While at times the deaths we encountered didn’t carry quite the weight that they did in the books, it was still an emotional ride. Often filled with moments that you wished you could cling to for old times sake. It was certainly not perfect and lacked the emotional oomf (it’s the only one I didn’t tear up during, even though it was the one that should have had me the most emotional). I still really enjoyed this movie and most people will as it ramps things up just enough to make you remember why you love Katniss Everdeen so much.

What did you think of the movie?

One thought on “Mockingjay Part 2 Review”