Felicity is in with the team. She’s quite jazzed about being Overwatch. Things are not as clear with her position at Palmer Tech. During a dry runthrough of a presentation she was really fumbling about with the presentation. Between being in a wheelchair and not being a natural presenter it was bound to be clunky. However, the idea of Felicity presenting the one thing that may save Palmer Tech from bankruptcy is a battery they are about to unveil. With the help of Curtis, Felicity was given the confidence to make her presentation and it turned out well. More importantly we saw her father who was revealed to be the Calculator.

While Darhk’s men were underground, the Arrow team were dealing with a thief running about. After some fun parkour scenes chasing the culprit down, they eventually realized they were hunting down Roy. He was acting odd, but it was quickly realized that he was being manipulated. Someone was watching his every move to make sure he did what was told. Failure would mean that the Calculator would post Roy’s identity and thus thrust Oliver’s clean slate into question.

This week was also the week of the Calculator. A tech genius who was just as brilliant at messing with computers as Felicity. It challeneged Felicity, but she also had back up in the actual team. It also gave Roy a chance to reunite with the group. Calculator was cocky and it was interesting seeing something a little difficult for Felicity. When the only way to stop the Calculator from trying to blow the whole city was to set an explosion, Roy offered up. He felt guilty about being the conduit that brought about Calculator so offered to trigger the explosion. That said, it did allow him to perform a rather fun escape from the exploding building.

We also followed a rather interesting and seemingly tangential plot with Nyssa. Not only was she broken out of Nanda Parbat in a glorious fashion, but she then went on to fight Katana. tatus is apparently the protector of the Lotus. It was rather interesting to see two badass females duke it out. However, they needed to come to an agreement to move forward. It turned out that the Lotus was what could help Thea from the effects of the Lazarus pit. 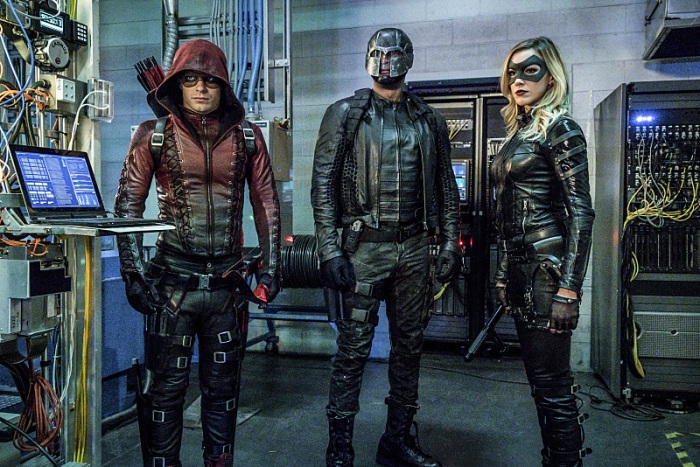 Thea was down and out for most of the episode. After nearly falling off a roof, it was clear that the effects that had been helping her had faded. Thea was succumbing to the bloodlust, but her unwillingness to actually give in was leaving her extremely sick. Unsurprisingly, Malcolm was right at her side to make sure that she was okay. It was perfect timing that when Thea was at her lowest Roy made his reappearance. When they finally shared a moment together it felt like a real goodbye. Considering she slipped into a coma it made sense.