STAR Labs has the worst security ever. I’m now debating whether STAR labs or the arrowcave is worse.

Barry from Earth-2 is a bit of a worry wart. He’s very odd. It was strange seeing our Barry-2 in Barry-1’s clothes, acting like someone so different from our Earth-1 Barry. it was a bit disorienting and to be honest it made it feel rather hokey. I’m not saying that Grant Gustin did a poor job. In fact, I think Gustin did a great job with Earth-2 Barry’s behavior. The real problem was that he looked like our Barry and it kept jerking me out of what was going on. Earth-2 Barry is smart and a damn good CSI tech. He was able to pinpoint Killer Frosts location. Dealing with Killer Frost int he forst was interesting. It relied heavily on Cisco managing to convince Killer Frost to help. Boy did she help. 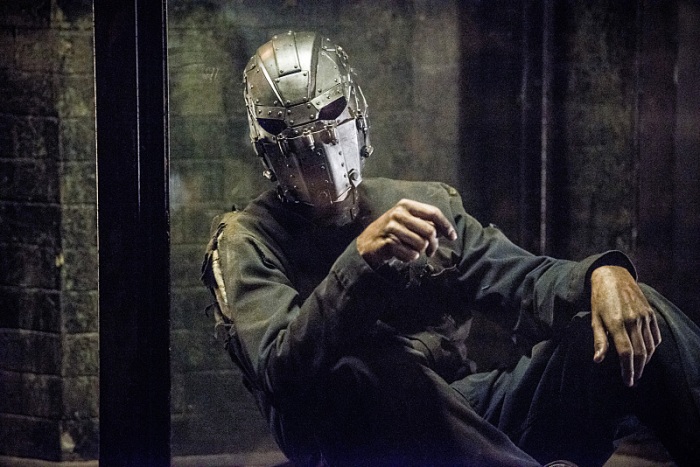 Barry is locked up with Jessie and the man with the mask. Jessie in many ways has resigned herself to her fate. Sure, she wants to get out, but she’s stopped learning how to trust. Zoom has done a number on Jessie. it isn’t just keeping her locked up. As we saw, Zoom is also messing with Jessie psychologically. Jessie is broken. Barry however has hope, especially since the man in the mask is tapping out some sort of message, but it’s not in morse code. He’s tapping some other pattern for them to decipher. A POW pattern using five taps. The man in the mask ended up tapping out Jay Garrick’s name.

Barry’s determination to get out of the cell was commendable. Again he was reminded that he would need to vibrate at a different frequency to vibrate through things similar to how Cisco vibes differently. They were able to get Jessie out of the cell rather easily, but Barry couldn’t get out. Our Barry was ready to give up, but the same couldn’t be said for Earth-2 Barry. Earth-2 Barry inspired Barry enough to make him believe. It was just what was needed to allow Barry to phase out, but they didn’t have time to get the masked man. Barry did make a promise that he would come back for him.

Iris has a new boss at the newspaper and he does not like The Flash. In fact, he goes so far as to make it clear that he will not publish her fluff piece. He wants to make The Flash out to be the bad guy. He wants to put the blame on him (which is ridiculous when you think of what Barry is doing as a humanitarian act). Iris needed to offer up something else and that was an interview with Jay.

Caitlin is concerned with the effects of velocity-9. It hasn’t been tested, but the threat in the city is still there. When people’s lives were in danger it was Jay who stepped forward wanting the Velocity-9 so he could help people. It worked. The real question is how it will be used in the future now that this seems to be an option. Not only that, but she seemed to find a real way to save Jay’s life. The Velocity-9 allows for his cells to start regenerating enough to heal.

Harrison Wells knows they no longer have a life on Earth-2 so he decided to bring Jessie back through the gate. They had it closed, but then there was tell-tale staging. Jay was gored by Zoom and pulled back through the breach.