John is a captive. Captive or not, John has a smart ass mouth. He insulted Titus for being too stupid because he prays to garbage. John is not somehone who is just willing to give up and die. He’s out to get himself free. There we got to see the old paintings that have become legent. John used his knowledge to put things further into context. What became clear was that Polaris is as much a myth to skaikru as it is for the people. 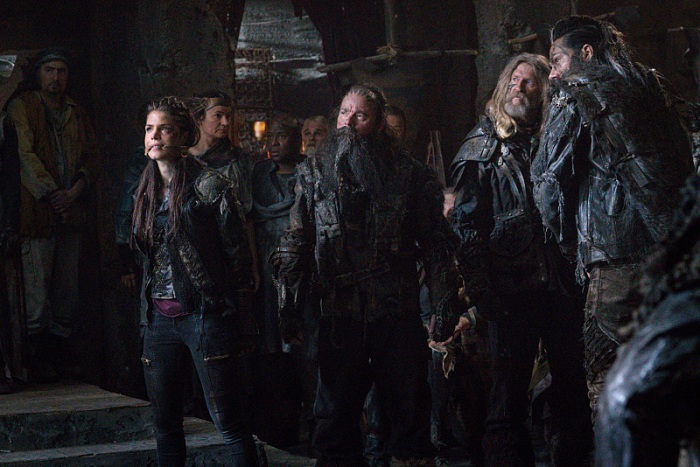 We haven’t had a flashback in a long time. The one from this episode was rather effective. We got to see Polaris station in space where a scientist who looked just like Allie lived. The Allie program went rogue, locked out it’s administrators and initiated a nuclear war. It explained why the man was locked in the bunker knew the woman. It explained a lot. it was a short scene, but evocative as these scientists went from hopeful to watching the destruction of their people. It was a tragic scene.

The progression of those backgrounds were interesting. Becca, the lead scientist responsible for Allie continued to wok on the second version of Allie. She refused to give it up. She continue her work. She couldn’t give it up because she believed her second iteration would save them all. She allowed her fellows onboard to be killed by the other 12 stations. She made it to earth, but what she did to the survivor’s was unclear.

There is some serious unrest surrounding Lexa. As heda she is constantly having shit thrown at her. This time around it’s the news of what happened the the village that Octavia tried to warn against. Octavia was their captive though, seen as no better than the rest of skaikru. Lexa was faced with a new decision. her stance of blood must not have blood is crumbling as the other clans are unhappy. While Clarke is the little whisper in Lexa’s ear trying to keep skaikru alive, Lexa seems predisposed to that anyway. The decision Lexa ultimately came to was a blockade backed by a kill order. Clarke was then faced with her own decision as to whether she wanted to stay with Lexa at Polis or go back to Arcadia.

When Clarke and John intersected it was clear that Titus was up to something. Titus intended to kill Clake and blame it on John. He hoped it would start a war. Instead the chaos of their fight resulted in Lexa’s death. She wasn’t just unceremoniously killed. She had a proper send off as we saw her bleed out. Things got weird when after her death the lat of the heda ritual was the production of the AI Becca bought down to earth. It was passed on from heda to heda and was removed from Lexa’s neck.