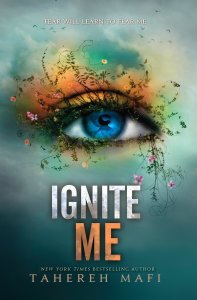 Ignite Me by Tahereh Mafi
My rating: 4 of 5 stars

I’m impressed to watch this story go from a 2.75 with Shatter Me to a 4 with Ignite Me. I still have some issues, but this was rather enjoyable. I’m secretly hoping there will be more in the future. There’s still so much of this journey that can be told.

Review time 3/11–
When I sat down to read Ignite Me, I had seriously low expectations. The previous two installments were slow and plodding. A character I was lukewarm on had turned into someone I didn’t want to read about they were so annoying. We had barely had any Warner in the previous book. The world building made everything feel like walking through set pieces not an entire world. I just didn’t expect much, but I wanted to see how it would end. I’d already invested myself for two books. I was surprised that I ended up liking it. Sure, I still had a number of problems, but things really started to settle in.

One of the biggest issues I had with the previous books was our main character Juliette. She transformed into a character who was far more bearable and that was clear in the writing. The first book relied far too heavily on metaphors. The second book got better. This book still suffers from this at times, but it is far more bearable. Even more importantly Juliette is coming into her own. She’s shedded the timid person she once was. She’s making decisions and sticking to her guns. That evolution of her character was refreshing. As a result it was refreshing. She grew into her powers too, learning how to not just accept them, but use them. By the end of the book I actually liked Juliette.

This evolution extended to Warner as well. A large part of why I loved this book was because of Warner. There was a vulnerability to him, yet he’s still so cold. This book really allowed us to delve deeper into his character and who he is. Watching him develop as a character and become more fleshed out was interesting to watch.

Then there was Kenji. I don’t have much to say about Kenji other than that I love him. End of story.

Adam was still absolutely awful. However, this time he transitioned from someone who was simply irritating and irrational, to someone who was down right cruel. Adam changed into a character that I didn’t want to have antyhing to do with. He said terrible things to Juliette and even worse things about Warner(though with reason). He continued to be a character that was ruled by emotions, only now his emotions were so nasty that I frequently grew annoyed. He was bitter and it made me bitter. I’m not saying that Adam didn’t have reason for the way he felt, it was how he expressed it, how frequently, and sometimes violently that he expressed the same thing over and over that got to me. I get it Adam, you hate Warner.

Which is why when the big reveal we had in the last book is outed to the one person who needed to hear it most, I didn’t believe the change in Adam’s behavior. Suddenly he was not raging, but far more accepting. This is the person that elicited all the frustration he felt. The loss and insecurity and then he embraces that person. Not fully, but well enough that I got the sense that in time they might be able to reconcile their differences. It just didn’t mesh with how that character had been behaving through the entire book.

The plot was again slow. It just plodded along, events didn’t always make sense. I just didn’t feel like much at all happened. It is because not much did.

Let me take a minute to talk about that ending. I won’t spoil anything, but it felt so abrupt. I won’t get in to the fact that it all felt too easy. I’m not talking about deus ex machina (although an argument could be made there), but simply convenience. Everything they needed to line up did perfectly. Their obstacles weren’t something that caused struggle. When that end finished playing out it was simply over. There was little exploration of how they felt. How well it even went elsewhere. It was just over. Done. There needed to be something more because as it was it didn’t feel like an ending.

Now it may seem like I just mentioned a lot of negatives. In all honesty, it wasn’t perfect, but I really enjoyed myself even amid all the imperfections because it finally sucked me in rather than keep me at a distance.