Arrow is back. So is Cupid. She’s none too enamored with love any more. The opening of her killing the young couple was absolutely defeatist. It wasn’t until she left them as a symbol on the street to be found that her hostile intentions were clear. She’s going after happy celebrity couples at that. The little wrench was how easily Felicity seemed to identifying with Cupid understanding that she felt love had betrayed her and she wanted to strike out at those that had it. 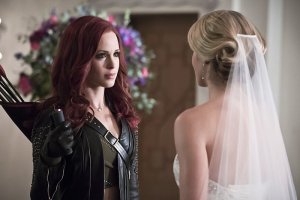 Felicity is back on her feet and packing up so she can move out of the loft. She’s doing her best to keep busy. They seem to be able to interact peacefully. However Oliver is taking it really hard. Felicity still wants to be a part of the team. It’s clear from Oliver’s reaction that he would rather not see her every night. It burns him. It probably doesn’t help that Felicity is still very much herself and chipper while joking. She’s done and moving on, but Oliver is just hurt.

The collision of Cupid going after celebrity couples and everything still being in place they were able to set a trap. For Oliver it was an opportunity to tell her how he felt one last time. It was a combination of Oliver’s vows and talking to Cupid that provided the necessary distraction. It was interesting seeing Oliver talk about how he loved her to her slowly warming indifference. Then there was Felicity who meant what she said, but she still needs time and to work over if she can ever really trust him. That’s a big deal and it’s not just going to get better in one fell swoop. Felicity continued to make it clear that she can’t do it. She also couldn’t be on the team and face him every episode. So she left. 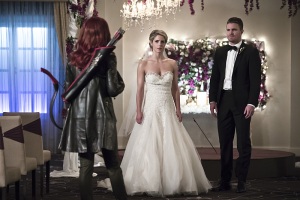 Laurel is handling the Damien Darhk case. For some reason Laurel seemed to be surprised that that he would have his lawyer attempt to walk free on bail and even get it all dropped. Laurel is really proving to be a bumbling and incompetent lawyer. I’m really surprised she managed to get to her position. She does not seem like the kind of person that should be the District Attorney or to have even been in a position where she was the Assistant DA. The only reason she got the case to go to trail was because of Quentin’s testimony. However this is putting a target on Quentin’s head.

Side note: Damn it people. I know they have problems, but I still really want Felicity and Oliver to end up together.