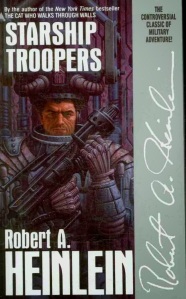 Starship Troopers by Robert A. Heinlein
My rating: 4 of 5 stars

My gut reaction when I first finished this book was that it was a 3.5 read. In the days since, I realized that it was much better than that. I just really needed to let it sink in and appreciate what it was. I think part of the reason for my initial lower rating was because I expected it to be a bit more. I thought I was in for an intense science fiction story about a future war. I was very much wrong. It was about a man and his rise through the military. His experiences as we went through highs and lows. When it comes to that the story is actually quite fantastic.

While I was reading the book, despite never wanting to put it down, I struggled with the the plot. I didn’t seem to understand the progression we were going through. At first it seemed we were going through how Juan Rico got to the position he was in during the opening pages. However as we ticked through I realized it wasn’t about the war situation he was in and the perils of death. As such it wasn’t until I finished the book that I actually understood what the plot was. Once I finished the slight haze I was fighting through the whole novel cleared up. The plot was Rico’s ascension and assuming more responsibility. We saw his fuck ups and his successes. We saw Rico become a man that had people look up to him and that’s where the true plot was.

Let me tell you, Juan Rico is one hell of a character to follow. Rico is probably one of the most relatable characters I’ve ever read. Hands down. Period. The end.

Maybe I should elaborate a bit more. We are taken on a journey from the time Rico decides that he wants to sign up for the military and become a citizen until he’s fully entrenched in the war. Through it we get to experience Rico’s doubts an uncertainties. We see him want to strive for more, but be weary. We get to see him want to protect his men. We see him change as a person to become someone who is stronger, with all his lumps pushing him into that position. Rico is never too power hungry. He never becomes too weak. He does what he needs to be done, what he thinks should be done, and then he proudly faces the consequences if it doesn’t turn out well. None of this is to say that he doesn’t make mistakes, have victories, or even reach lows that are sometimes hard to bear. Rico just does it and conveys it in a way that makes you understand.

This is military science fiction and while it may lean more heavily on the military aspects than some of the science fiction ones, they are certaintly there. One of the coolest creations in this story are the powered suits. These suits enhance the user and are the pride of the Mobile Infantry. These suits make the wear run faster, jump higher, and hit harder. For that reason alone I was constantly intrigued when they were either discussed or we got to see Rico spend time in them. Do I want one? You bet your ass I do. If these were available and I had to sign up for the Mobile Infantry, I’d do it in a heartbeat.

There was also the alien life form simply called bugs. There were different kinds and while I’m not sure I got the best painted picture of them, I seemed to get the point. After all it was this alien life form that attacked the human race in a skirmish for space dominancy that made things interesting. It’s when you dig deep and start thinking about the commentary that things got interesting. No one every really referred to them by their proper names. This is a book about war and the bugs are the enemy meaning they are meant to be dehumanized (a strange phrase considering they are aliens, but I can’t think of anything better so go with it).

Shockingly, this book as I read managed to dredge up a lot of feelings. However, unshockingly, like good science fiction it made me think. It wasn’t in hypotheticals. The topics he discusses and explores through the novel are concepts that still greatly apply to us today. Heinlin’s polical views shone through. While there were things I agreed with and things I didn’t. I can say pretty unequivocally that It got me questioning and examining the state of current affairs even now. It is that sort of thinking that arises from science fiction that I love. It provides topics to discuss that would greatly effect us.

At the end of the day, I found myself really enjoying the story as well as the many characters that floated through. They were mere side notes to Rico, but they all served their place in shaping young Johnnie and the narrative. Another thing I really enjoyed that I didn’t pick up on until much later in the novel was that Rico was Filipino. I thought he was hispanic based on the name, but that uncertainty made me love it even more because there was never a problem with race, but who people were and how they approached the world that caused conflict. A topic I could write an entire essay on. So over all I really liked this one.

One thought on “Starship Troopers by Robert A. Heinlein”