Laurel Lance is dead. That meant that the vast majority of the episode was spent with flashbacks to times when Laurel was still around as the team also dealt with moving forward without her. It is strange that when someone dies on this show, they never truly stay dead forever. There is this lingering presence of them on the show. That was extremely present in this episode. We know that Laurel is officially dead, but Laurel was more present in this episode than she had been in a long time. For a change, she was driving the vast majority of the story.

As for the flashbacks we dealt largely with a period of time which we knew from the show, but we never got to see. The time after Tommy’s death. It was an emotional time for both Oliver and Laurel, but we never got to see them go through it. So for a change the flashbacks actually ended up working really well. That is largely because it actually pertained directly to the episode at hand and the characters that we were dealing with. It was also rather fitting that the time we were flashing to was another period of mourning there was a really great sybiosis that came from that. It also really established just how much Laurel and Oliver loved each other again. There was either tension of absolute nothing between the pair so at times it was easy to forget that they actually had been in each other’s lives for a long time.

Team Arrow also needed to deal with the issue of the girl who had stole Laurel’s sonic device and was prancing about the city as Black Canary. However, she wasn’t doing good. She thought that the Arrow had failed the city and was out to kill Ruve and ultimately tarnish the legacy that Laurel had built. That meant they needed to figure out what she was going to do and then how to stop her. 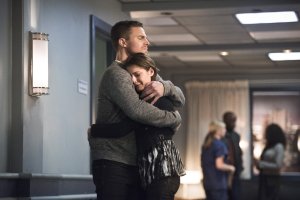 Also the emotional turmoil that Quentin went through was almost a bit much to deal with. Quentin was grasping at straws unable and unwilling to accept that his daughter was dead. Obviously a father wold be distraught over his daughter’s death. It wasn’t until he started to open up that you were reminded about just how important Laurel was to him. She wasn’t just his daughter, but she was the person he turned to when he needed to be strong. Seeing Quentin so lost at now having to go at it alone was something that was heartbreaking to see.