Daisy is completely drinking the kool-aid from HIVE. She is all in on everything he wants to happen. However what Hive wants is threatening and it pits Daisy against her old team. There is still something about Daisy that wants to love her friends. She wants them to be okay. She wants them to see that Hive is doing what is right. It is like she is a part of an overzealous religious group that won’t allow others to exist in any state other than complete agreement with what Hive offers. 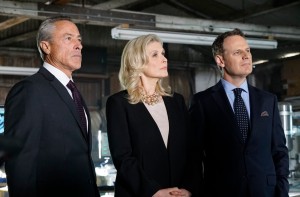 The concoction that FitzSimmons were working on was close. Close enough that they could test, but they had a problem of not having a good subject. Lincoln feeling rather inept and useless, he decided to take the antidote himself. It ended with him being rather sick. It was a foolish move. However it did finally allow for testing. All of it ended up being for nothing as it didn’t work.

I seriously don’t need all the Fitzsimmons relationship drama. it just isn’t something that I love. In fact I find myself tuning out of those parts of the episodes because I’m not invested. The fact that they are navigating

The most interesting thing to emerge from the episode was the presence of the Kree. At the open of the episode we saw how the Kree created Hive. However seeing The Kree brutally fighting in the present was an interesting obstacle for Hive. The inhumans uner Hive’s care were the direct target of the Kree. That ended up working out just fine for Hive. Daisy was able to subdue one and then they could use them. They needed that blood badly for their plan to make more inhumans. If it wasn’t for Mac Hive’s endeavor would have succeeded.