Within the first few moments of the episode you could tell that it was a lighter episode (it is a family show after all). And it held up to the initial premise. A trip back in time to appease Clara’s life long desire to meet Robin hood, led to an encounter with the thief who steals from the wish and wanted to do so with the TARDIS. The result was a rather silly duel between the Doctor and Robin Hood, a spoon vs a sword.

The episode presented a strange duality when experiencing the mirth from the early scenes with Robin and his merry men. Those moments were made even funnier, by the Doctor examining the merry men to confirm his idea that they are not actually real (he did bring her there to disprove their existence after all). When we saw the stark contrast to the events going on in town where people are dying as they stand up for themselves. The Sheriff of Nottingham is a dangerous man who isn’t apt to deal with others peacefully, opting to kill those who attempt to stand in his way in the slightest.

This episode really gave Capaldi’s gruffness a chance to shine. The Doctor is smarmy and easily irritable. This adds to much of the humor in the show now. As rather than the Doctor saying funny things with the intention of eliciting laughter, now he is simply being the laughing stock on his own. His inability to accept Robin Hood and their animosity drove much of the humor in the episode. Thus now the Doctor servers more as the point at which is being laughed at rather than pointing out the laughter. It is a very big change from the Doctors since the shows return in 2005. The Doctor is the butt of the jokes and when done in reasonable amounts can maintain a level of humor that is enjoyable. I found that after a while in this episode the banter between the Doctor and Robin growing stale because of how frequently it was used int he episode.

Again Clara was worth her weight in gold, while the Doctor was off being silly and trapped with Robin. Even the sheriff thought that Clara was the one in charge. Lately, Clara has had to step up to par like many prior companions haven’t had to. Clara not only needs to keep the Doctor in line, but she must also solve issues on her own. Watching Clara swindle information out of the sheriff was a it of entertaining proof of that and how she knows how to handle different people, in this case pandering to an egotistical man. 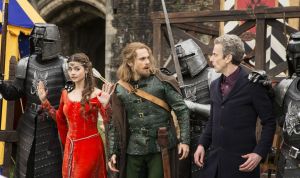 When the reveal of how entwined the robots were with the town came out, the Doctor’s vindication was amusing. The Doctor’s “I knew it” face was down fairly well. However, Robin made off with Clara and yet again The Doctor didn’t make a very hard effort to get her back. In Clara’s defense, she seemed perfectly okay being with Robin. Their separation again wasn’t long, but it forced the Doctor to think on his own a bit. Even reluctantly come to the conclusion that Robin may not be a robot and the man of legend actually was real. A tough pill for the Doctor to swallow, especially after finally finding something wrong with Robin.

2 thoughts on “Doctor Who – “The Robot of Sherwood” Review”