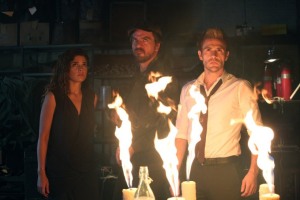 It seems that John is finally pushing to find out what is going on with Zed and the Resurrection Crusade now that his demon is gone. he seems to have gotten pretty protective of Zed. it is kind of strange considering we haven’t really seen the two bonding. Yes, Zed has been around for a while, they’ve worked together. However, they haven’t had much time alone to really get to know each other.

This week we’ve delved even further into Chas’ past. We saw them together from tow years ago which was a nice way to give us more to his character. As I noted last week, Chas has been steadily fleshed out. The progression for Chas has been beneficial to the show and his character. Rather than just being an immortal assistant, he had a personality and did more than just server as an ace in the hole. This was finally the episode when we saw how Chas came into his power. Turns out the drunken protection spell John put on him worked. It absorbed all the lives of the people who died in the fire and gave it to Chas. So while cats have 9 lives, Chas had 47. By the end of the episode, he was down to 31. 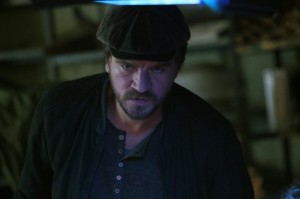 We learned about Geraldine, Chas’s daughter who was affected by a demon on the outset of the episode. She was one of the people who were impacted by some force that was taking out a number of people. Her soul was separated from her body. As long as her body was alive, she still had a chance. This meant John going through his back channels yet again. it involved John encountering a person from his past again. Then it involved them still needing to jump through hoops. It was the same old kind of episode that we’ve been becoming used to. Thankfully, the focus on Chas’s family made this feel more targeted and interesting. It didn’t add much as far as new threats, but it did add great improvements for Chas’s character.

If there is one thing that’s abundantly clear, its that you don’t want to work with John Constantine. Person after person who has worked with John eds up dead. it isn’t bad odds. Thus when people keep saying that those supporting John should cut and run, it makes sense. We have real evidence that being near him is potentially hazardous. Sure it could be beneficial to stay by his side because he will fight for those he cares for, but that doesn’t make it a safe place. John is never out to have the people around him die. He’s a bugger, but he is a good guy. Unfortunately the trail of bodies that he comes to and leaves behind is always growing.