It’s back. It’s back. The Strain and the strigoi are back. You can’t begin to understand how excited for this. Yes, the first season was not perfect. it certainly had it’s flaws, but I found that I absolutely loved the show. Now we are back for a second season. Thankfully, the return episode was completely solid, though lacked some potential bang. It did seed a number of interesting through lines that we’ll get to see play throughout the season while effectively catching up with all pertinent characters. Some things have changed, but it is ultimately the same show. Yes, the child actor playing Zach Goodweather is no longer the same, but we also got lots more backstory. That was actually an element of The Strain that I always appreciated. It always gave you the full story without going to far.

And that is where the episode began with a flashback to a young Abraham as he learned the story of Sardu a kindly man with gigantism. He was a sweet man who cared about people and we saw his confrontation with the strigoi that killed his hunting party. And with this he became what is now the Master. A giant vampire of total danger. However not only did it tell us about the origins of how the Master was first infected, it also painted a more complicated picture that we will surely learn about as the season goes on. One of those notable elements was Sardu’s cane that hi gigantism required him to use. The very cane that we’ve seen Abraham walking around since the beginning of the show.

The state of the world was a little bit confounding to me, but a radio report settled it up for me. Since things opened during the day when walking about isn’t really an option for the vampires. The city from the outside looked rather standard with cars driving about as normal. There were increased sirens, but that is about it. Instead, we know that people are suffering in this situation from the broadcast which indicated that the national guard was called in and it is still a localized pandemic.

We caught up with the characters though not much time has passed. For Ephraim he’s not looking to be like Dutch and Vasily who have turned all of their efforts toward fortifying their location so it’s safe from attack. It seems to involve a lot of mesh wiring and more UV lights. However, it was Ephraim’s admittance that he isn’t a great vampire hunter and is better off acting as a doctor to those who need it. The problem is as of now, we haven’t seen anything that will help prevent or cede the transition. Even one of the infectants left within the body is enough to change a person. Despite this not wanting to be a vampire hunter, that is what he is now. Even his trip to the pathology lab for supplies was riddled with an attack. While the pair was still a bit clumsy with handling them, they are showing proficiency in ways that didn’t last season. Their skills are improving whether they want them to or not and that’s something that will be interesting to see it to continue to evolve over time.

Our little science team is doing all they can to try to halt the process. They want a cure, but the more that they look at the facts it’s clear that isn’t going to happen. Instead Eph comes up witht he idea of infecting the infected, but the execution is one that they can’t yet continue on because Abraham needs help. However, the trip to the storage facility proved useful to them as well. The people they were trying to save ended up infected and that made them the perfect new test subjects so they can work on finding a way to infect the infected. Sorry guys, you’re just canon fodder. 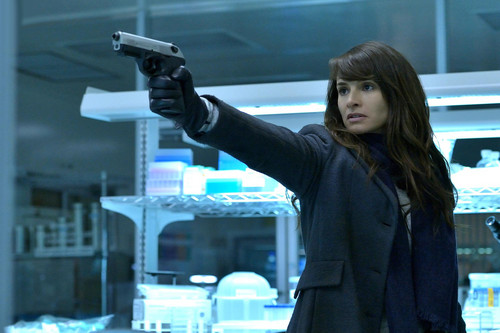 Abraham on the other hand was brought in to see Von who has Gus still in his employ. There he is brought to the ancient ones. Von presents Abraham with the choice. They want his help to bring down The Master who is the seventh of their kind. It is clear that he is a rogue outcast. This should be an interesting alliance. To top off how dangerous the ancient ones are we were treated to the gruesome sight of a man being fed to them. The attack was tough to watch even before they descended on him just because you knew what was going to happen. While it was disturbing, there were a few moments within the feeding that looked a bit ridiculous.

The master is suffering. Apparently the attack laid on him resulted in enough physical damage that his body is now failing. It was rather groesque to see the burned and ravaged face he was sporting. This has made The Master angry and ready for revenge. He needs to heal himself, some way some how or to regain a a body that can be sustained.

Which all led to the very ominous and unsettling abduction a bus full of blind children. See I get suspicious when a group of random characters are introduced.with no connection to anyone else. Thus it didn’t see good when we learn that they are getting a special evacuation from the city. So when the bus stopped, without crossing out of the city and they were herded off the bus to the back of a warehouse where Eichorst waited. They ended up being turned and placed underground as some sort of pure agent, “the children of the night” as the Master said. The master intends to use kelly as someone whole will be transformed from her current basic vampire state.