I maintain that Kennex does not know how to interact with children.

This weeks case of the week had to do with reprogramed robots. In this case, what looked to be an early version of a robot was reprogrammed rather than to work for the police, but to commit crimes. Just when the police thought they had the robot down, it got into the evidence unit and took over another head. The goal was to steal the other head that of an XRN. 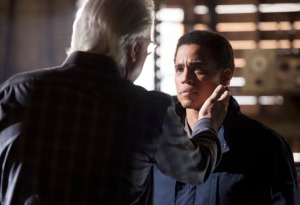 There was a lot of cryptic language on the episode and we like Dorian were in the dark. This XRN is dangerous and decommissioned for a reason. As everyone talked about what they knew as though everyone else knew, we were in the dark. This led to exposition. The XRN was designed to be more soldier than cop and only came into existence to save a dying company after the DRNs were decommissioned. A single XRN, Danica, was able to take out 26 cops before it was eventually cornered and nothing but a head was left.

The XRN is leaving bodies in her wake until she encounters Dr. Nigel Vaughn, the man who created him. There seemed to be an odd connection between Dorian and Nigel as though Dorian’s specific DRN was special to him in some way. Whether that was true or not, he was excited to see a DRN still in the field. It was nice seeing who created the DRNs. While Nigel wasn’t the one sending Danica on her killing spree, he was willing to help track her.

Nigel created synthetic souls. He was out to capture what really gave each person life. He wanted to harness the untangible to emulate, the part the DNA couldn’t replicate. He voiced major concerns about Danica’s version, which had a slightly different make up. He goes so far as to reassure Dorian that he isn’t like Danica. This is all before we learn that Danica stole 500 microchips in order to make an army of XRNs.

I enjoyed the conversation between Rudy and Dr. Vaughn. He called Dr. Vaughn out on bringing something ahead of its time. The people simply were not ready for machines with souls. It was nice to see Rudy able to talk to somehing about the advanced mechanics of the DRNs and MXs. It was an interesting look at how people fear robotics now. It can almost be parallelled with the hub bub surrounding stem cell research. Dr. Vaughn was a nice treat on the show as he proved why he was the man who created Dorian and his kind.

I really love when Dorian gets to show his robot-ness. The fight between Dorian and Danica was really great as they moved a round with human-esque style that was taken to the next level. It was a fight that anyone could see coming since the episode began. It was unfortunate when Dorian was thrown through the pillar into rebar. When Dorian was temporarily down it was nice that Kennex came in for the kill with his own synthetic.

It wasn’t much of a surprise when Dr. Vaughn made off with the synthetic souls and the processors. It was nice that we are going to see our first returning villain as he mass produces his army. Vaughn is going to work over the wall. With the wall mentioned repeatedly this episode, I’m really interested in it’s significance and why it’s there. It’s time for some mythology building that the show is really lacking.