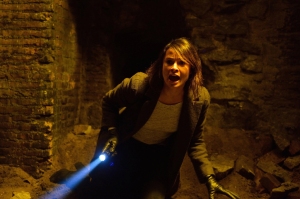 Can I go ahead and throw it out there, but if Abraham carved the masters coffin while at a Nazi work camp, he would be in his late 80s (maybe even early 90s). Nearly 15 years older than the actor, David Bradley, actually is. That is one very old man fighting against the nazis. Unless of course this story is supposed to be set ten years earlier in the early 2000s. In which case the plot line with the iphone cell tracker would not have worked. This is just me identifying a logical inconsistency in the show, but it not determining how I like the show.

We finally caught up with Gus again. After heading into his home he noticed a bad smell. He quickly found his brother, already turned staring at the TV. Again Gus proved that he knows how to protect himself much like Vasiliy and took out his own brother. It got even worse when he found is bitten mother dying as she was hiding in a closet. She most likely was caught by her son and hid as she herself changed. The heartbreak in Gus’ scene was probably one of the strongest showings of emotion on the show. It’s fascinating how Gus can be so compelling with such little material. It is likely because he does what needs to be done, without being emotionless like Vasiliy or over emotional like Eph or Nora.

Zach was left with Nora’s unstable mother. There he was the man in charge. A young boy left alone during a crisis having to deal with an unstable woman. It wasn’t fair, and a big mistake on Nora’s part. Despite his father’s warning Zach ventured out because he didn’t have much choice. he didn’t know how to control her with anything other than the cigarettes which she had run out of. It was a bad move on his part, but he’s a kid and Nora should have stayed with her mother, especially knowing that her mother was already becoming unsettled staying at Setrakian’s place.

It did lead to Zach’s little adventure for cigarettes. He first encountered some young adults who were looting and got in the way as Zach fled from one of the vampires. He also bumped into Gus who took care of things in the store as Zach ran. I really appreciated this scene as it was one with a lot of tension. I know I didn’t want Zach to get hurt nd when the vampire woman disappeared my heart raced. When juxtaposed against Eph’s little venture down the hole it held a lot more suspense. It also gave me more reason to not like Eph as he left Setrakian in a hole to follow a voice. No tension there, just frustration. Thankfully, Vasiliy getting stuck in the tunnel rose the tension again.

Things have been going to shit for the past few days. I’m glad that we are finally seeing the chaos going on with the survivors.

One thought on “The Strain – The Third Rail”