It was so disgusting to see so many of the people who hurt and contributed to Kieran’s death paying respects to him as though they actually cared. However, things started to get weird after Klaus arrived and Kieran’s coffin held Klaus’ baby. With his back turned, his father staked him. All in all, it was an absolutely terrible dream. 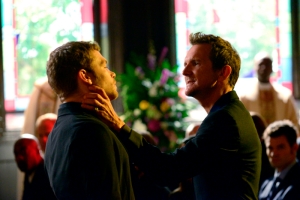 Genevieve is still teaching the young witches. Monique doesn’t respect the deaths of others. It’s hard to think that Monique is the girl that Davina and Sophie were so desperate to revive. her time on the other side has made her positively unbearable. Monique is messing around with things she best keep her hands out of, like using a voodoo doll on Hayley.

Klaus is inconsolable. Cammy seems to be handling it far better than Klaus. In Klaus’ defense his terrible state has much more to do with his terrible dreams and fears of being a father. Cammy is struggling with everyone celebrate Kieran’s life. That said she isn’t bout to be a push over and cough up the key to Francesca. Cammy learns that Marcel had the key, completely blowing her trust. But Marcel insisted that

This week we dealt with flashbacks. The first of which saw Klaus freeing Marcel from slavery and talking to him about family. As an Adult marcel demanded that his old master free his slaves. The laws said that he must. When Marcel saw the other slaves being tortured he broke it up, but that resulted in him being shot. A dying Marcel forced Klaus’ hand and made him turn him or lose him rather than heal him.

Hayley is determined to find out about the moonlight rings. Klaus isn’t dealing with it right now. Not on the day of peace, not when he is dreaming of his father. Turns out that Elijah was also dreaming of Mikael. While it’s clear that it isn’t impossible to throw a curveball at the originals, they are a dangerous force to go against when they are together. The brothers go after Genevieve, certain that she’s behind whatever is happening to him. Klaus decides to let Genevieve believe they trust her in hopes of getting her to make the moonlight rings.

Davina, with the help of the other returned young witch, tries to commune with her dead love, Tim. Unfortunately, she had an encounter with Mikael. It is soon revealed that the events happening in The Vampire Diaries with the other side disentegrating is effecting The Originals. I love synergy and this combination of plots. Mikael is trying to break through to the living world again. We all know it will be hell for everyone in the French Quarter if Mikael comes back.

When Hayley collapses during the processional Klaus was at her side instantly. Even Genevieve was there to help. I wonder how angry Genevieve will be when she finds out what Monique has done. Meanwhile Hayley had an encounter with Mikael on the other side. Hayley’s reaction to the idea that she was dead was ludicrous. Hayley wasn’t going to go out so easily though. Genvieve realized that Hayley’s condition was because of Monique and figured out a way to stop it. Hayley in her state kills Mikael, but declares that her child will never know Mikael before she woke.

Back with the living, Hayley agrees to stay at Klaus’ compound. He’s determined to keep the baby safe. He even made a baby room for her. He wants Hayley to stay. It was a nice moment. One of those rare Klaus moments showing that he isn’t all bad. Hayley and the baby have entered his inner sanctum of the people he could fight for.

Cammy has an idea of what the key was for. Apparently Sean was buried with the criminals and never had a funeral. Cammy believes that Keiran hid something in the grave. However, the key opened a box with nothing inside. Nothing except a code. A code that only she knows what to do. Now it is Cammy’s secret from the world.

Genevieve reprimanded Monique for her actions. It was clear that she couldn’t live with killing the baby. The ancestors had a different plan.

One thought on “The Originals – A Closer Walk With Thee”