It all began with a flashback of how Grant Ward came to be. Unsurprisingly, he was highly skilled, but a hothead. That got him in trouble and locked up, but Garrett was intrigued and recruited him. The instant Ward agreed to go with Garrett, things went bad. Garret took Ward and forced him to learn that he needed to earn everything on his own. Garrett left Ward in the wilderness with no warning that he was going to do that. Without anything to hunt Ward had to survive with only the help of a dog. Garret left Ward on his own for six months. When all his training was done, Garrett ordered Ward to kill the dog  who kept him alive and he’d bonded with. He saw it as weakness, but Ward couldn’t kill the dog up close, he had to do it afar with a sniper. 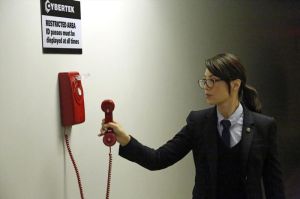 Coulson figured out what the connector was to everything that had been happening to them, which was Cybertek. It was a messy chart, but effectively mapped out the major issues that encountered. Turns out that Skye had inserted a trojan that would track the data’s information. The trick is they need to get to one of Garrett’s machines that would get the information. That means sneaking in to one of those buildings. Tripp brought in some of his grandfather’s old spy gear from the time he was in the howling commandos. It was amazing to see Coulson and Fitz bug out over the tech. It was a lot of fun to see everything that SHIELD was doing in the old days.

Garrett is hard on Ward. His failure that happened last week is being reamed to him now. Raina was busy at work with the data and has almost recreated the drug that brought Coulson back. It’s quite terrifying that they are so close to having a way to bring back their evil teammates. Turns out that Raina are only interested in the science. She’s wants to know more about Skye in particular because she believes they are similar.

Coulson and May pretend to be interviewing with Cybertek to get inside. May wore one of the Howling Commandos pins that scans UHF rather than going via wifi. After a failed interview, Coulson and May took out the elevator operator and a random guy in the hall before hitting the mainframe room. Only to realize that there is no mainframe and everything is hard copy. While rifling through the files about Deathlok they learned that the first Deathlok project was actually Garrett and we saw the cybernetic implants we saw on him last episode.

While Garrett berated Ward for his failures to stop being the whiny kid he was back then his cybernetic malfunctions. His organs are failing and soon even the cybernetics won’t be enough to save him. He’s going to die within the next few months. Which makes sense that he wants the drug to save his life.

It was interesting that Fitz is still clinging to the idea that Ward is being controlled or manipulated. Any opportunity he has to rationalize Ward’s actions he does so. It’s sad, but like the audience, the team is growing tired. That lead to a nice moment between May and Skye. While Skye thinks that May just doesn’t feel, May makes it clear that she is angry. Furious actually and when she has a chance to take Ward out, she’s going to channel all that rage into doing that.

Raina seems to be highly interested in Skye. She even tells Ward a story of a baby girl who was hunted by her own parents. Which is an interesting reveal that it was Skye’s parents trying to kill her.

FitzSimmons finds the bus and Simmons was given an order to not engage. They were ordered to retreated. But Simmons suggested they sneak one of the dwarfs onto the plane, she played on Fitz’s anxieties. A moment later Ward emerged. Face to face with the man he looked up to as a big brother, he saw that Ward really didn’t care. The gadgets he had in his pocket came in handy. He used the EMP and made Garrett convulse as Ward rushed to his aid. The look of disdain in his eyes was great. Notably though, Simmons didn’t seem plussed or worried the entire time. Not angry, just nothing, its rather suspicious. Fitz desperately tried to get Ward to see reason and let Garrett die. Ward is too devoted to Garrett though and struggles with the trying to save Garrett.

Garrett orders Ward to kill FitzSimmons. Ward goes after them, but Fitz is still clinging to what he remembers of their false friendship. When FitzSimmons refused to leave the room, he decided to open the airlock and drop FitzSimmons into the middle of the ocean in their cargo hold.

Meanwhile Raina learned that Garrett had the centipede serum in him, but he was so close to death that it didn’t make him strong, but barely kept him alive. Raina gives him the injection of the resynthesized serum. At first it made him glow, but then it seemed to take effect and began to save them. While it seems to be working, there’s something about Raina and her reluctance to truly help Garrett come alive. her allegiance lies with those who are special and making people special, but there is a look of disdain she is constantly giving him. I wouldn’t be surprised if she is trying to play him and gave him a subpar synthesis of the drug.

While of that was going on, the other half of the team was still breaking in to the Cuba location to hack a computer when a centipede soldier appears. Right at the same time that we learn Quinn is selling the super soldier program to the military.

2 thoughts on “Agents of SHIELD – Ragtag”