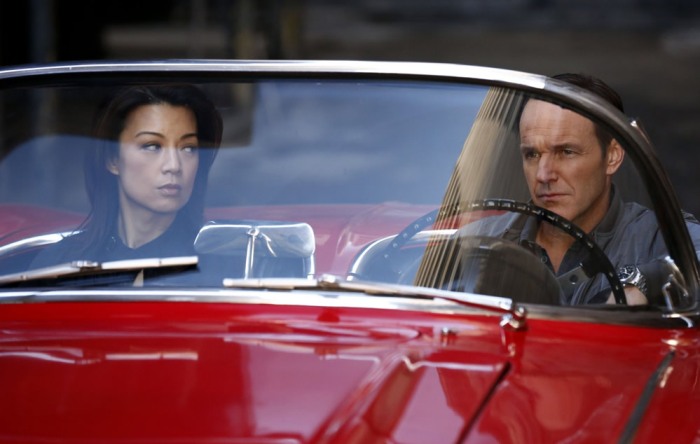 We got the see the birth of Blizzard tonight.

We got a little insight into why FitzSimmons and Ward and May are a bit at odds. There seems to be a rivalry as to which division of SHIELD is the most difficult to get into. While they all agree that Communications is the easiest, there seems to be a discrepancy between Operations and Sciences and Technology.

The case of the week brought as back to the SHIELD Academy. Aside from the unnecessary preaching and history lessons that FitzSimmons delivered to the student body. They were there to attempt to calm the students after some of the students were frozen in the pool. However, their speech is cut short when a student, Donnie, freezes in front of everyone. Now, FitzSimmons who were brought in to speak to the kids because they each played a part in this weapon are forced to figure out what is going on. FitzSimmons are able to get Donnie out of his deep freeze.

The interchange between Fitz and Donnie was great as they talked about inventions and themselves. Donnie clearly idolizes Fitz and admires his genius as Fitz figures out the problem to his machine. The sadness of Donnie’s predicament being an outsider and wishing he had someone to talk to. Finding out that Fitz was being manipulated to find out the last clue of the problem so he could please a potential friend, Seth. Donnie is easily manipulated, but you can tell that he is a good kid that got mixed up with some bad people in a shady situation. You can see how much Donnie’s heart breaks when Seth dies, but it’s also clear that he’s now going down a dark path. A path that now includes an ice ability.

We also got to see more of Skye brooding and being generally annoying. It’s nice to see that most SHIELD agents go through a long rigorous process to become an agent in their division, while Skye essential hacked her way in. At least she acknowledges that she got in easy. Even seeing her cry at the truth of her past wasn’t very moving. There is a distinct disconnect that needs to be fixed on the show.

May took Coulson out of his slump that’s had him holed up in his office, to go find out more information about who actually dumped Skye as a baby. This had the potential to be an interesting b-story, but unfortunately, its hard to care when you don’t care about Skye. This trip was more so for getting Coulson back in the game. He’s now determined to get rid of all of the secrets in the group and Skye’s past is one of them. In a brief moment of almost hilarity, May responded to Coulson’s need for truth by admitting she’d been having sex with Ward.

As for Skye’s actual past, the man Coulson and May were hunting down openly came with them. An entire village protected the 0-8-4 which was apparently Skye. Everyone who helped her as a child was killed. When she was found she was sleeping in the arms of the dead. She was placed into the system and moved again and again, to keep her safe. The question now is why was Skye the 0-8-4.  At least we are finally starting to understand Skye’s past, even if hat doesn’t make her present any better.