n one of Gotham’s extremely rare continuations we saw Jim digging further into this serial killer. It is interesting, but not surprising that Jim is still doing this despite there being a threat on Leslie’s life. Unlike Barbara who fled and foolishly came back, Leslie made it clear that she was never going to leave. This really meant that Jim had no choice but to dig into this serial killer case.

This meant Jim needed to drastically change his tactics. Bringing the case to the forefront of the news was the first ting. The next was honing on on who may be associated with this serial killer. That brought Jim to the killer’s old home in which his father hid his mother’s rotting corpse. It was disturbing, but it was part of a deeper story that was twisted. He was once deformed, unloved, and deceived all leading him to be a serial killer. 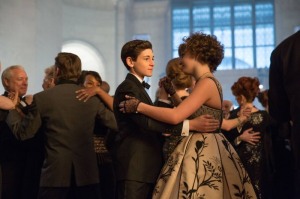 Bruce is trying to make moves within his organization. He’s a child, but he has no problem with scare tactics. He wants to scare the board into realizing that he’s onto them. Worst for them, he’s enlisted the help of Selina to break into the safes and steal information. The pair of them were adorably awkward on the dance floor, being gawked at by so many people. They were still having a bit of a conflict though.

The two storylines intersected at the Wayne benefit where our killer encountered Barbara. This should have left me worried. However, I don’t like Barbara. I never felt concern for her safety, only that I knew something would happen that wouldn’t happen with an anonymous girl. This encounter did mean that Jim was going to inevitably stop our killer. Considering this episode still didn’t resolve the serial killer case, but upped the stakes further I’m surprised Gotham has stretched into this format.

I really am not sure how they are going to allude to Edward Nigma going bad. We know that he becomes a villain. However right now he’s been portrayed as nothing short of a hero. Time and time again he stands up for what is right. This includes when that silly woman is being battered by her boyfriend and tries to play it off as though it was okay even taking fault. Now I say she’s silly not because she’s a victim, but because her loyalty and appreciation of Nigma seems to sway. Either way it’s Nigma standing up to say that what’s happening isn’t right. Him doing that makes you want to rally behind Nigma.If they are doing anything with Gotham it is setting Nigma up as the type of man you can’t help but like. The fact that he brutally killed someone who was taunting him and trying to attack him, doesn’t make me hate him in the slightest.

2 thoughts on “Gotham – “Under The Knife” Review”