Felicity has become some what comic relief as of late. The episode begins with Felicity fumbling with her mask in the van just before the break into a Queen Consolidated Building to blow it up. It was a nicely paced sequence and we learned more about what was going on at every step. The end result was Oliver pulling the trigger on the planted bombs. 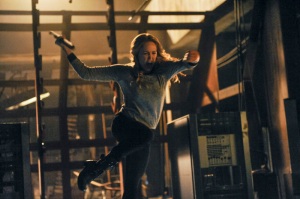 Quentin Lance is in Iron Heights Prison facing charges. He’s up for 18 months or he can rat out The Hood and The Canary. Laurel posing this question about the Arrow felt like reaching for confirmation. Quentin though lived in bliss on that secret, while he blatantly lied and avoided the truth about Sara being the Canary.

Isabel is ready to freeze the Queen’s out of their assets. This turmoil has drawn Oliver and Moira back together. They need to now convince Thea that she needs to sign off to protect what they do have. Without her, all three of them will be broke. Moira admitted that Isabel is a cruel woman who loved power, also that Oliver’s father had an affair with her when she was an intern.

In an interesting turn of events, Slade was waiting for Ollie and the team in full Deathstroke attire in the warehouse. It was kind of silly as each member of the arrow team went up to fight against Deathstroke alone. Each of them quickly dispatched, before Deathstroke simply left. I will never understand why people will fight each other one on one. The team knows that Slade is extremely strong, it makes no sense for them to not attack together when it would give them a better chance.

Their fight landed Sara in the hospital. Laurel quickly came to check on her sister, but after her conversation with the doctor and seeing the scars she’s suspecting what is up. I’m glad that they aren’t making Laurel come across as a foolish girl who can be played. Now that the seed was planted, she wasn’t about to just let this information go, but she wasn’t going to believe it blindly.

Thea is going through a lot. She’s just not handling it well at all. She’s lashing out and it doesn’t seem like a few days is making her any more rational. Thea seems intent on scorning everyone who loves her. She’s acting more like she’s 12 than 19. She couldn’t even give Oliver the time of day to explain himself. To him he is nothing but a liar and there fore not worth her time, despite being her brother and loving her. It isn’t as though he has a laundry list of things for her to hate him and this was the final straw. Nothing was able to make her accept her family. To them they are just liars.

we got our first looks at Caitlin Snow and Cisco in this episode. They were working at a secure facility by the same organization that owned the particle accelerator. It was housing the serum that Slade wanted. They ran, but Caitlin had Cisco use a device that temporarily disabled Salde. Unfortunately, they didn’t know he was just after a part and he was quickly gone as the two panicked. Oliver and Sara arrived too late to stop him, but Laurel was just in time to spot them. Apparently Felicity knows Caitlin and Cisco. They also mentioned that Iris had been visiting Barry a lot.

Slade stole a machine that would pull Slade’s blood and process the serum in the machine before being delivered to the patients. This would allow for his new prison recruits to have a much higher success rate. Oliver planned to let Slade use it because it would make him weak.

Oliver confronted Isabel about being a mere affair. Isabel went through Slade’s training because she was written off by Oliver’s father. This conversation also revealed that Isabel was convinced she was his soulmate and he chose his family over her. Hell he even terminated her internship over Thea. It was also revealed that Oliver’s father knew Thea wasn’t his daughter.

After piecing all the necessary information together, Laurel confronted the Arrow. Unfortunately, she was interrupted before she could state that she knew it was Oliver with the call after her father. With her father, Laurel was foolishly ready to tell Quentin who the Arrow was. Quentin stopped her. His reasons were more along the lines of needing the Arrow to be a symbol rather than a person. And then after a very pointed conversation, Oliver

I don’t get why Felicity would call Oliver about the blood transfuser going into use if she didn’t want Oliver to go handle it. It made no sense. But Oliver was more intent on stopping Slade that making sure he would have the finances to continue his fight against Slade. It’s a little foolish in the long term. In the short term, it was a damn good thing that he went to the site because it wasn’t Slade hooked up to the machine at all, but Roy.

Apparently, Slade and Isabel found Roy in a homeless shelter and he didn’t even put up a fight. What I still did not get was why Isabel is so devoted to helping Slade. Yes, he helped her get what she wanted, being a CEO under the age of 30, but why continue. Why is she so excited to continue to cause trouble for Oliver. It isn’t just about the company, but her hatred for the Queens and anyone who gets in the way is just collateral damage. She was ready to shoot Oliver as he tried to free Roy from his restraints, but Diggle shot her before she had the chance.

The flashbacks reunited Sara and Oliver on the island, but Oliver is still hurt. Ivo is dying and Oliver is refusing to give him a quick death. But Ivo begs to be killed swiftly. Neither Oliver or Sara is willing to let him die until Ivo reveals his secrets about the mirakuru. Apparently Ivo was able to create a serum to turn someone infused with mirakuru back human. Oliver killed Ivo, sparing Sara from doing it herself.